西方和中國的情人節 Valentines vs The Magpie Festival

The Magpie Festival ~ from HanBan

What is Magpie Festival in China?

The Double Seventh Festival is a traditional festival full of romance. It is on the 7th day of the 7th lunar month and often goes into August in the Gregorian calendar. It is also known as Magpie Festival, falls on the seventh day of the seventh lunar month on the lunar calendar. It has sometimes been called Chinese Valentine's Day since the late 1990s, which is, strictly speaking, an inaccurate portrait of the festival. Girls traditionally demonstrate their domestic arts, especially melon carving, on this day and make wishes for a good husband.

The Origin of Qixi Festival in China

Long, long ago, there was an honest and kind-hearted fellow named Niu Lang. His parents died when he was a child. Later he was driven out of his home by his sister-in-law. So he lived by himself herding cattle and farming. One day, he came across a beautiful girl--Zhinü, the seventh daughter of the Goddess, who just had escaped from boring heaven to look for fun. Zhinü soon fell in love with Niulang, and they got married without the knowledge of the Goddess. Zhinü proved to be a wonderful wife, and Niulang to be a good husband. They lived happily and had two children. 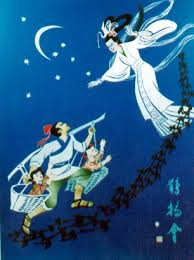 But the Goddess of Heaven found out that Zhinü, a fairy girl, had married a mere mortal. The Goddess was furious and ordered Zhinü to return to heaven. Alternatively, the Goddess forced the fairy back to her former duty of weaving colorful clouds, a task she neglected while living on earth with a mortal. On Earth, Niulang was very upset that his wife had disappeared. Suddenly, his ox began to talk, telling him that if he killed it and put on its hide, he would be able to go up to Heaven to find his wife. Crying bitterly, he killed the ox, put on the skin, and carried his two beloved children off to Heaven to find Zhinü. The Goddess discovered this and was very angry. Taking out her hairpin, the Goddess scratched a wide river in the sky to separate the two lovers forever, thus forming the Milky Way between Altair and Vega. Zhinü must sit forever on one side of the river, sadly weaving on her loom, while Niulang watches her from afar while taking care of their two children. But once a year all the magpies in the world would take pity on them and fly up into heaven to form a bridgeover the star Deneb in the Cygnus constellation so the lovers may be together for a single night, which is the seventh night of the seventh moon.

Traditions of Magpie Festival in China

There are quite a good number of traditions associated with Chinese Valentines Day. According to customs, Qiqiao festival celebrated at the night, girls offer their sewing kits as well as fruit and flowers to the Altair and Vega stars, known as Cowherd Star and Weaving Maid Star in China, to pray for intelligence and smart skill in needlework as well as a marital happiness. Some girls even place needles on the water and if the needle does not sink, the girl is believed to be mature enough to find a husband.

Lovers go to a match-making temple to pray for a prosperous life ahead. In the evening, they spend their time looking at the stars. People believe that this is the time when Vega and Altair come close. So, this is the best time to witness a beautiful encounter. Today some traditional customs are still observed in rural areas of China, but have been weakened or diluted in urban cities. However, the legend of the Cowhand and Weaver Maid has taken root in the hearts of the people. In recent years, Qiqiao Festival is celebrated as a romantic valentine’s day in China particularly among young people. As a result, owners of flower shops, bars and stores are full of joy as they sell more commodities for love. Many people express their love to their sweetheart with gifts, chocolates, flowers and romantic dinners.