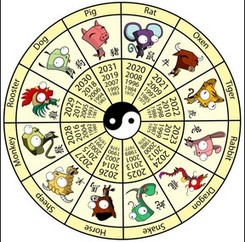 The Knowledge of Chinese Zodiac

The Chinese word “Shengxiao”, better known in English as the Chinese Zodiac, is a scheme that relates each year to an animal and its reputed attributes, according to a 12-year cycle. The zodiac traditionally begins with the sign of the Rat, and the twelve zodiac signs are Rat, Ox, Tiger, Rabbit, Dragon, Snake, Horse, Ram, Monkey, Rooster, Dog and Pig. The zodiac signs cycles continuously, and determines the animal or sign under which a person is born.

The Origin of Chinese Zodiac:

Long long ago, our ancestors invented the 10 tian gan (heavenly stems) and 12 di zhi (earthly branches) for chronological purposes. The signs are used to designate the hours, days, months and years. However, since most people at that time were illiterate, the signs were difficult to use. Later, to make things easier to memories, people used animals to symbolize the 12 earthly branches. The old time division was mostly related to number 12: one ji equals 12 years, one year has 12 months, one day has 12 time periods called shi chen. Ancient people observe that there are 12 full moons within one year. So, the origin of Chinese zodiac is associated with astronomy. In Chinese tradition, each animal sign is usually related with an earthly branch, so the animal years were called zi rabbit, chou ox, yin tiger, mao rabbit, chen dragon, si snack, wu horse, wei sheep, shen monkey, you rooster, xu dog and hai pig. Many Chinese people strongly believe that the time of a person's birth is the primary factor in determining that person's personality.

The Legend of Twelve Animals:

There are many versions about the legend of twelve animals, For example, According to Chinese legend, during a Chinese New Year celebration. Buddha invited all the animals to his kingdom, but unfortunately, for reasons only known to the animals, a total of 12 turned up. The mouse was naturally the first, followed by the ox, then the tiger, the rabbit and so on and finally the pig. Out of gratitude, Buddha decided to name the year after each of the animals in their order of arrival, and people born of that year would inherit some of the traits of that particular animal. These animals are also supposed to have some influence over the period of time they were named after. Another legend of Chinese zodiac is that the twelve animals quarreled one day as to who was to head the cycle of years. The gods were asked to decide and they held a contest: whoever was to reach the opposite bank of the river would be first, and the rest of the animals would receive their years according to their finish. All the twelve animals gathered at the river bank and jumped in. Unknown to the ox, the rat had jumped upon his back. As the ox was about to jump ashore, the rat jumped off the ox’s back, and won the race. The pig, who was very lazy, ended up last. That is why the rat is the first year of the animal cycle, the ox second, and the pig last.

The Knowledge of Chinese Astrology


What is Chinese Astrology?
Chinese astrology is based on the traditional astronomy and calendars. The development of Chinese astrology is tied to that of astronomy, which came to flourish during the Han Dynasty. Chinese astrology has a close relation with Chinese philosophy and uses the principles of yin and yang and concepts that are not found in Western astrology, such as the wu xing teachings, the 10 Celestial stems, the 12 Earthly Branches, the lunisolar calendar, and the time calculation after year, month, day and shichen (時辰).

The Background of Chinese Astrology:
Chinese astrology was elaborated during the Zhou dynasty and flourished during the Han Dynasty. During the Han period the familiar elements of traditional Chinese culture, the Yin-Yang philosophy, theory of the 5 elements, Heaven and Earth, Confucian morality were brought together to formalise the philosophical principles of Chinese medicine and divination, astrology and alchemy. Chinese Astrology is concerned with nature and its traits, the signs progress year by year whereas Western Astrology cycles monthly. The consideration of Yin and Yang is a very great influence upon this subject, Yin being passive, female and receptive while Yang is agressive, male and exploratory.

The various permutations of these 2 essential forces in nature, places, organisations, events and humanity and the quest to achieve balance so that both operate together in harmony rather than opposing or canceling each other out are an essentialy Oriental viewpoint and quest, they form the basis of many Far Eastern traditions and other influences in Chinese Society such as Feng Shui.The 12 Animal Signs are : Rat, Ox, Tiger,Rabbit (or Cat), Dragon, Snake, Horse, Goat (or Sheep), Monkey, Rooster, Dog and Pig. The animal ruling year in which you were born has a profound influence on your life.

The Yin or Yang is broken down into Five Elementson top of the cycle of animals. These are modifiers and affect the characteristics of each of the 12 animal signs. Thus, each of the 12 animals is governed by an element plus a Yin Yang Direction. The Chinese 'elements', by contrast, were seen as ever changing and moving forces or energy, one translation of xing is simply 'the five changes'. The balance of yin and yang and the five elements in a person's make-up has a major bearing on what is beneficial and effective for them in terms of feng shui, the Chinese form of geomancy. This is because each element is linked to a particular direction and season, and their different kinds of life force.

Lunar Mansions
In Chinese astrology, the importance is situated around the moon's motion through the zodiac rather than the motion of the Sun through the zodiac. The position of the moon for different days is referred to as the "lunar mansion" in Chinese Astrology. The 28 lunar mansions are particularly important for determine which action is most appropriate for a given day. The lunar mansions are divided into 4 groups of 7 in relation to the seasons of the year. The groups are categorized as follows: The Green Dragon of Spring, The Black Tortoise of Winter, The White Tiger of Autumn, The Red Bird of Summer. The 28 lunar mansions constitute the oldest Chinese "zodiac". The Lunar Mansions form the traditional background for all of Chinese Astrology.