The Introduction to Laba Festival

In China, December of the lunar calendar is called the La month, so the date of December 8th is also the Laba Festival. It is a traditional festival of China that is regarded as the preface of the Spring Festival. Laba Festival was originally an occasion for people to give sacrifices to their ancestors, and to pray to heaven and earth for a good harvest and good luck for the family. In China, it is customary on this day to eat Laba Congee. The Laba Festival had not been on a fixed day until the Southern and Northern dynasties, when it was influenced by Buddhism and got a fixed time on the eighth day of twelfth month, which was also the enlightenment day of the Buddha. Therefore, many customs of the Laba Festival are related to Buddhism.

The Origin of the Laba Festival

The origin of this festivity abound, One holds that over 3,000 years ago sacrificial rites called La were held in the twelfth lunar month when people offered up their preys to the gods of heaven and earth. The Chinese characters for prey and the twelfth month were interchangeable then, and ever since La has been used to refer to both. Since the festival was held on the eighth day of the Last month, people later appended the number eight, giving us the current Laba. The majority Han Chinese have long followed the tradition of eating Laba rice porridge on the Laba Festival.

The Legend of Laba Festival in China 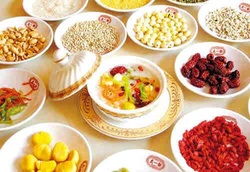 There is a legend of how the Laba Festival began, and it is centered around a hot porridge called Laba rice porridge. Supposedly Laba rice porridge was first concocted in India. As the son of a king in the north of ancient India, Sakyamuni could not bear the local people's suffering from illness and the theocracy ruled by Brahman (one of the four Indian classes). As a result, he abandoned his lofty position and went out to seek a way to enlighten himself according to religious doctrine. After six years of enduring a very hard life and self-torture, he realized the truth of Buddhism while sitting under the bodhi tree on the eighth day of the 12th lunar month. It is remembered that during these six years, Sakyamuni only ate rice every day. Today the Chinese eat Laba rice porridge on this day to honor Buddha.

Laba Rice Porridge was first originated in the Song Dynasty and became a steadfast part of the festival during the Qing Dynasty. People today are still eating the porridge on what is now called Laba Festival Day. The Chinese have always placed importance on growing crops and reaping a bountiful harvest. One way they use to show appreciation to their ancestors for the good growing season is to sacrifice to them, along with prayers to heaven and earth. Making and eating the Laba rice porridge, which is combined with many things that come from their harvest, is one way they do this. Laba rice porridge contains glutinous rice, red beans, millet, Chinese sorghum, peas, dried lotus seeds, red beans and some other ingredients, such as dried dates, chestnut meat, walnut meat, almond, peanut, etc. Actually eight ingredients are used, cooked with sugar to make the porridge tasty. Northerners prefer to use glutinous rice, red beans, dates, lotus seeds, dried long'an pulp, walnuts, pine nuts and other dried fruits in their porridge; southerners like a salty porridge prepared with rice, soybeans, peanuts, broad beans, taro, water chestnuts, walnuts, vegetables and diced meat. In the north, it is a dessert with sugar added; in the south, salt is put in. Some people like to add cinnamon and other condiments to add flavor. Another custom is the soaking of Laba garlic. Garlic is soaked in vinegar for twenty days starting from the Laba festival. The garlic and vinegar is then used alongside Chinese dumplings (or jiaozi) around Chinese New Year. Laba porridge is not only easy to prepare, but also a nutritious winter food because it contains amino acids, protein, vitamins and other nutrition people need. Cooked nuts and dried fruit are good for soothing nerves, nourishing one's heart and vitality, and strengthening the spleen. Perhaps that is why it is also called babao (Eight Treasure) porridge.