The Chongyang Festival falls on the ninth day of the ninth month of the Chinese lunar calendar, so it is also known as the Double Ninth Festival. It is celebrated for over 2000 years but officially defined as a festival during the Tang Dynasty. As time goes on, the Double Ninth Festival gradually to be celebrated also as an Elder Day for young people to show their respects to the elderly as double nine symbolize the longevity in Chinese culture. The ninth day of the ninth lunar month is a day when the two Yang numbers meet. So it is called Chongyang. Chong in Chinese means "double." Also, as double ninth was pronounced the same as the word to signify "forever", both are "Jiu Jiu," the Chinese ancestors considered it an auspicious day worth celebration. That's why ancient Chinese began to celebrate this festival long time ago.

The Origin of Double Ninth Festival 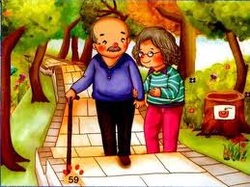 In ancient times, there lived a man named Huan Jing. He was learning the magic arts from Fei Changfang, who had become an immortal after many years of practicing Taoism. One day, the two were climbing a mountain. Fei Changfang suddenly stopped and looked very upset. He told Huan Jing, On the ninth day of the ninth lunar month, disaster will come to your hometown. Then, Huan Jing told his countrymen to hide on a hill while he went to defeat the monster. Later, people celebrated Huan Jin's defeat of the monster on the ninth day of the ninth lunar month. Double Ninth may have originated as a day to drive away danger, but like the Chinese New Year, over time it became a day of celebration. In contemporary times it is an occasion for hiking and chrysanthemum appreciation. Stores sell rice cakes (糕 "gāo", a homophone for height 高) with mini colorful flags to represent zhuyu. Most people drink chrysanthemum tea, while a few traditionalists drink homemade chrysanthemum wine. Children learn poems about chrysanthemums, and many localities host chrysanthemum exhibits. Mountain climbing races are also popular; winners get to wear a wreath made of zhuyu.

The typical customs of Double Ninth Festival include wear cornel, appreciate chrysanthemum and climb mountains and high places. The cornel is believed to drive away evil spirits and prevent people from illness in late autumn according to the theory of Chinese Medicine. Because of the clear and sunny climate and blooming chrysanthemum in late autumn, it is also pleasant to going out and people often go hiking, mountain climbing, and appreciating flowers during the Chongyang Festival. The custom of ascending a height to avoid epidemics was passed down from long time ago. Therefore, the Double Ninth Festival is also called "Height Ascending Festival". The height people will reach is usually a mountain or a tower. Ancient literary figures have left many poems depicting the activity. Even today, people still swarm to famous or  little known mountains on this days.
The Double Ninth Festival is also a time when chrysanthemum blooms. China boasts diversified species of chrysanthemum and people have loved them since ancient times. So enjoying the flourishing chrysanthemum also becomes a key activity on this festival. Also, people will drink chrysanthemum wine. Women used to stick such a flower into their hair or hang its branches on windows or doors to avoid evilness.